10 Plants to Grow in Winter

Build Your Own Doomsday Seed Vault 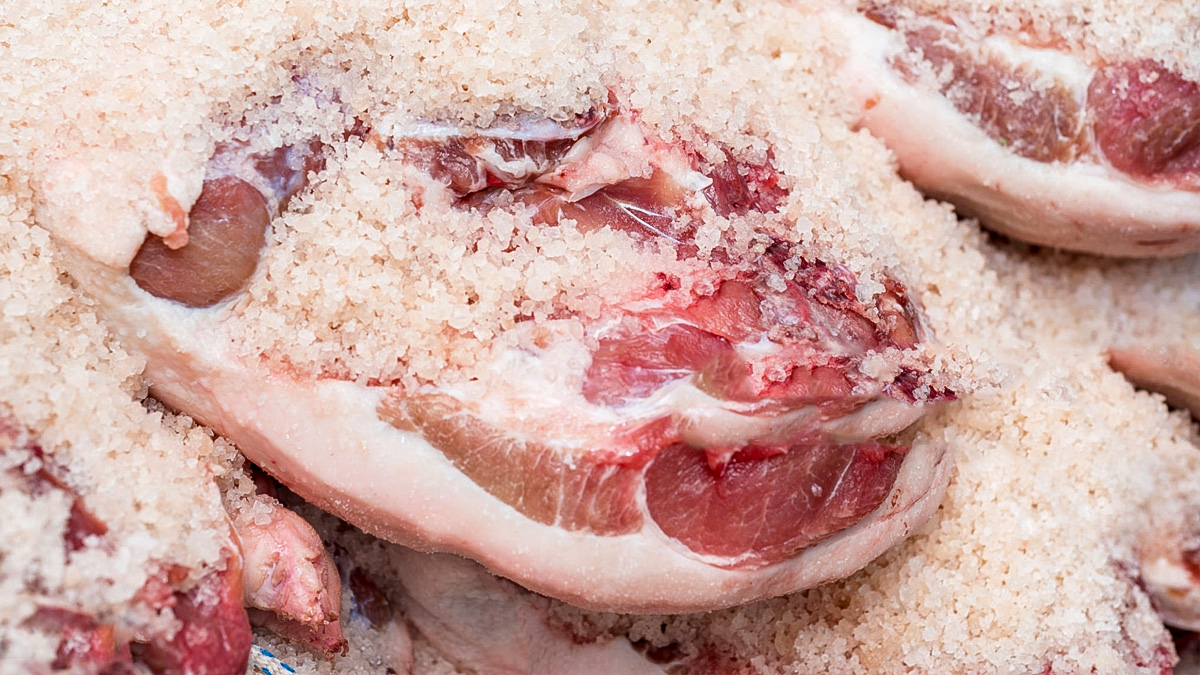 The storing of preserved foods has been around long before there was canning or freeze-drying. All foods deteriorate when kept beyond their natural life, which might be anything from a few hours to a year or more. Foods are under constant attack from microorganisms and their own enzymes.

Preservation methods are designed to minimize spoilage or preferably to remove it entirely. Until the 19th century and the discovery of microorganisms, methods of preservation had to be discovered primarily by chance. Interestingly enough, many of those methods are similar across the globe.

Many of the old methods of preserving meat have fallen by the wayside, but they still have a place, especially in an off-grid homestead or in a survival situation.

Salting was a traditional method of preserving which involved applying salt either as a brine or dry salting. Salted meat and fish are a staple of the diet in many parts of the world.

Salt inhibits the growth of microorganisms (including those on meat). It does this by drawing out water from the microbial cell (by osmosis) due to the high concentration of salt outside the cell. The cell loses water until it reaches a state where it cannot grow and then cannot survive any longer.

Concentrations of salt up to 20% are required to kill most species of unwanted bacteria.

Salt beef is sometimes known as corned beef. The use of the term ‘corned’ comes from the fact that the Middle English word corn could refer to grains of salt as well as cereal grains.

Dry salting, also called corning, is a process where meat is dry-cured with coarse ‘corns’ or pellets of salt. Corned beef of Irish fame is made from a beef brisket, although any cut of meat can be corned.

In the home processing of meat or fish, dry salting is recommended over bringing. brining requires more carefully controlled temperatures than dry salting and the flavor is less desirable.

Dry salting is a relatively simple process. Simply rinse the fresh meat in cool water, then pour a thin layer of salt (generally kosher salt – which is simply larger grain salt) all over the meat and rub it in. Next, hang or set the meat out in a cool environment (under 60 degrees Fahrenheit, but not below freezing) for a couple of weeks to dry it out some. Before cooking the meat, rinse off the salt with water.

Drying is the oldest form of food preservation. It works because dried food is not spoiled by yeasts, molds or bacteria as long as the amount of water in the meat is not enough to support life processes.

In a humid climate, the drying will be slow and mold may appear. Open-air sun drying is at the mercy of elements which we cannot control. In wet weather, the product can either be covered, taken inside or placed in a smokehouse for additional drying. Sun drying is labor-intensive and requires plenty of space.

Screens placed on blocks allow for better air flow around the food. The blocks may be placed over a sheet of aluminum to reflect the sun rays and increase the drying temperature. The best screens are stainless steel or food grade plastic.

Meat needs to be sliced in strips no more than an 1/8″ thick, and fat must be removed as it will quickly go rancid.

Drying food may attract insects and birds, so consider adding a protective cover over the food. This may be another screen or a sheet of cheesecloth.

Remember that the object is to try the meat as quickly as possible to prevent decomposition.

Smoking dehydrates the meat, changes the surface to be acidic and therefore hostile to bacteria, and makes the meat mouthwateringly delicious.

An important note is that smoking is not cooking. You bathe the meat in the smoke produced by the fire, but don’t let too much heat from the fire get to the meat!

The wood you choose is important for the final flavor of the meat. You want a hardwood with a good scent. The same compounds that smell good will also make the meat taste good. Hickory, cherry, oak, maple, and applewood are all common woods to use.

Avoid resinous woods like pine! You don’t want that pitch getting into your meat.

And though it sounds like you want as much smoke as possible, you actually want to avoid certain types of smoke. Avoid freshly cut wood, as that green wood will be too full of moisture and will produce wet smoke. Instead, you want to use dry seasoned wood. Dry and rotten wood, aka punky wood, is nearly perfect–it smokes more but without excessive moisture.

If you are not on the move, you want to build a smokehouse to make the process easier although it can be done over a campfire.

A basic smokehouse is a square wooden building, eight foot at its tallest and four feet wide all the way around. The roof should slope, and there should be an opening in the wall near the top of the slope so smoke and heat can escape.

A fire is built at the bottom of the smokehouse and meat is hung up top, far enough away from the fire that it doesn’t cook – aim for 100 degrees Fahrenheit or a little less. A thermometer stuck in the wall is a great idea, as is a dutch oven or another vessel to contain and control the fire.

The meat should be hung from wires stretched out across the top of the smokehouse, just under the ceiling. Remember, we don’t want to cook the meat, just smoke it!

However, if you need to preserve your meat without being in one place long enough to justify building a smokehouse, you can make do with a campfire.

The best way to do this is to dig a pit in the ground to place your campfire. Cover the fire partially to block the heat from cooking the meat, and hang the meat where the smoke escapes. This won’t be as efficient as a smokehouse, but it’ll get the job done.

Jerky is any lean, red meat that has been lightly cured with a solution of salt and spices and then dried, either mechanically or naturally. The typical routine for pre-industrial hunters, whether of this age or in times past, was to gorge themselves with fresh meat at the place of the kill and dry the rest over slow, smoky fires. The drying process not only preserves meat by removing much of the water content (therefore making it unpalatable to bacteria); it also reduces the weight substantially. A pound of fresh meat ends up as about 4 ounces of jerky.

Jerky is dried — not cooked — meat. Simply and basically, one only has to apply slow heat, on the order of 100 to 125 degrees Fahrenheit, until the meat is dry. This process is made easier and tastier, however, by applying some sort of a salt cure beforehand.

There are as many ways to make jerky as there are people that love it so I am not going to attempt to “one-up” any chef’s that have their favorite methods.

The time to practice all these methods is before you need them in a survival situation, so grab some cheap cuts of meat and try your hand at preservation.

How and why to make Elderberry syrup

Keeping your teeth clean when the SHTF