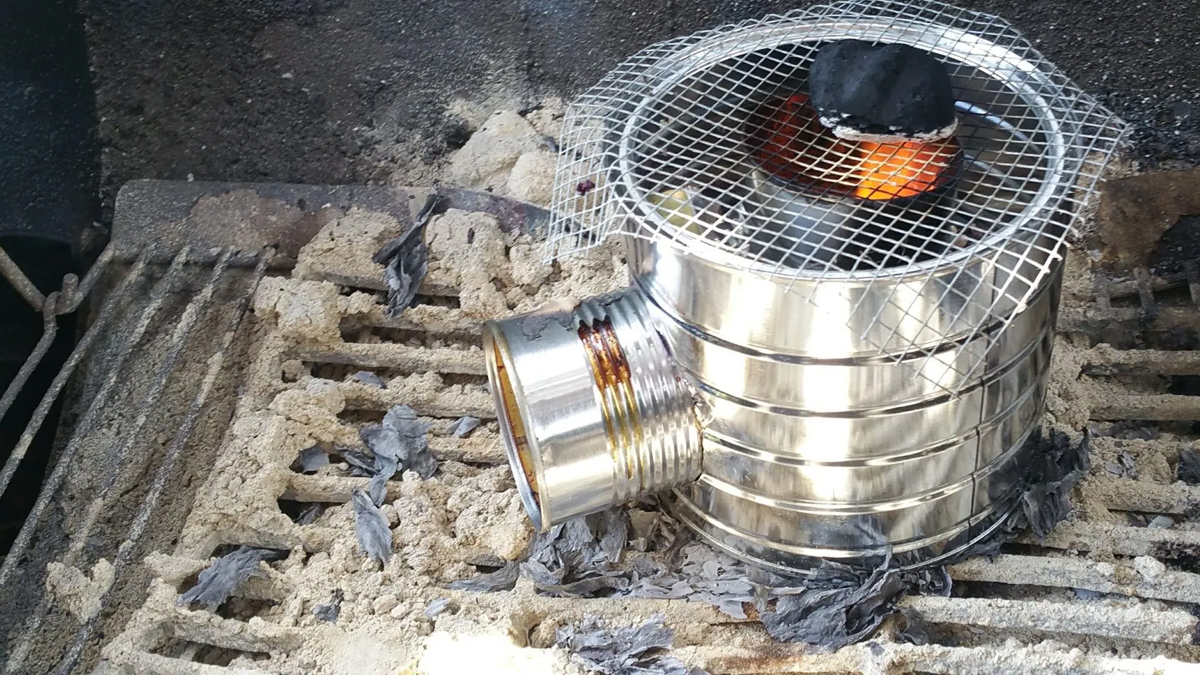 Rocket stoves are one of the best sustainable technologies out there. They use minimal fuel and create incredibly hot fires easily. And they can be built at almost no cost.

The main difference between a normal fireplace or woodstove and a rocket stove is that rocket combustion is close to complete. When wood is burned it releases volatile compounds that we recognize as smoke or soot or creosote. In a rocket stove these compounds are sucked into the insulated and very hot ‘burn tunnel’ of the unit where they combust, releasing even more heat energy to drive the rocket process, unlike a normal fire where they are blown out the chimney.

This distinctive sucking of the flames down into the burn tunnel, and the resultant ‘roar’ is what gives rocket stoves their name. This is also a part of their magic. Rocket stoves are open where the wood is fed in, allowing lots of oxygen to be drawn into the unit. As the fire starts, and the burn tunnel heats up, the rising hot air races up the heat riser, drawing lots of air behind it. This incoming air flows into the feed tube and across the burning wood – creating the same effect as pointing a big air-blower at your fire. It gets really hot, the wood burns beautifully, and you hear the air roaring as it charges through the system.

Building A Rocket Stove For Cooking

Sure you can buy a Rocket Stove, but they are really simple to make. And doing it yourself gives you a lot of flexibility in the finished product. You can control the size and make them as simple or as fancy as you want.

This is a very simple stove that requires just tin snips and 3 metal cans. A handful or two of twigs and you will be cooking. I am going to give you a couple of different examples on how to make this super easy stove. I personally like the one made in a paint can because the handle makes it easy to transport.

Another super simple stove that requires only 4 cinder blocks to build.

Another simple stove, using bricks. Again something that doesn’t have to be permanently installed, you just need a couple dozen bricks. Although any bricks will work, it is better to use fire bricks, especially near the burn area.

This is a more involved design and requires not only scrap metal, but also the tools to cut it and the ability and tools to weld it together.

This only requires the ability to dig a hole, and is handy if you need to build a concealed fire. It is the simplest version of the rocket stove concept. Please pay attention to the warnings Josh gives at the start of this video.

Other Uses For Rocket Stoves

As previously mentioned rocket stoves can be scaled to a variety of sizes and they many applications. Here are just a few examples of these other uses.

Rocket stoves are for warming up your shop and since they take just scraps you could even use up the leftovers from your latest woodworking project..

Just because there isn’t electricity available doesn’t mean you have to forego hot showers!

This is actually a rocket mass heater, and is most commonly made most commonly from cob and is found in many alternative building materials homes such as Adobe, Cob or Earthbag homes.

How to create drinking water out of seawater

How to keep your house warm during a power outage.