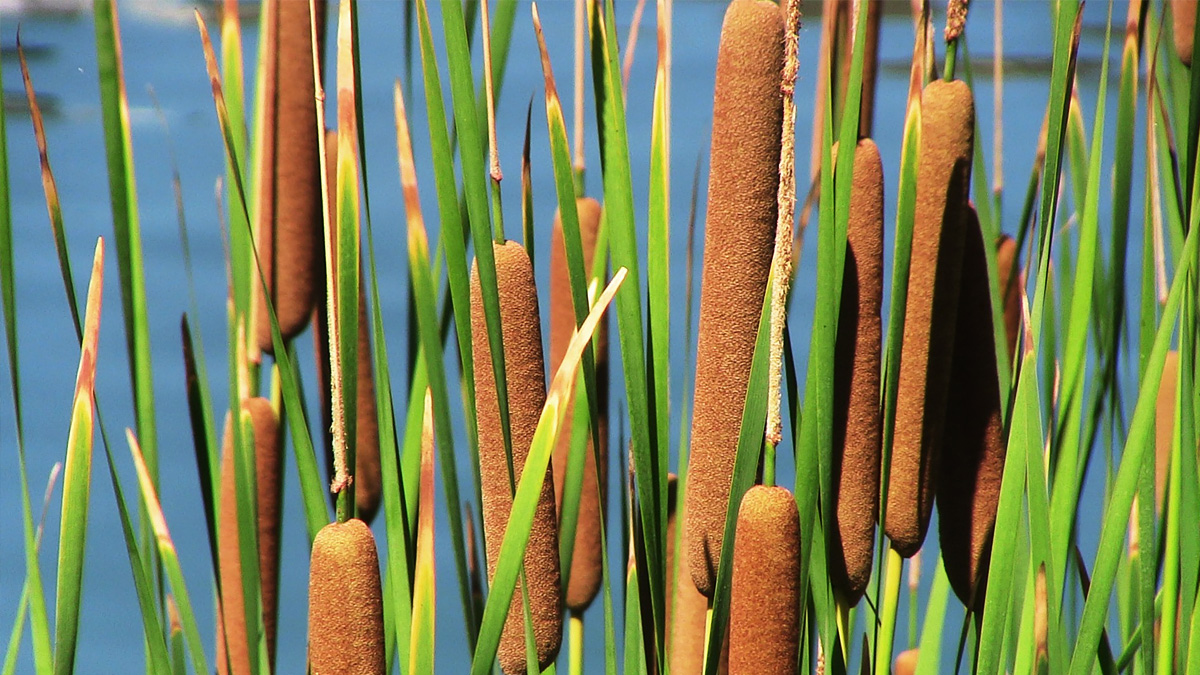 Cattails – supermarket of the marsh

Cattails are an amazing plant that can provide fire starting materials, food, medicinal uses and even a touch of luxury to your wilderness camp. While they can be considered and invasive plant, finding them should put a smile on the face of any one trying to survive off the land.

Cattails are also a culinary delicacy and all parts of the plant can be eaten. The sweet fiber in cattail roots provides an abundance of starchy carbohydrates; the new stalk shoots can be eaten to obtain Vitamins A, B, and C, potassium, and phosphorous; and the seeds can be ground and used as a flour substitute. The roots and stalks can be baked, boiled, fried, or, if harvested from a pristine area, eaten raw. Cattails can be used in recipes for pancakes and bread, casseroles, and stir fry.

Like many other wetland plants, cattails bio-accumulate toxins. When harvesting cattails for consumption, it is important to collect them from a clean source, away from roads and buildings.

In early spring, dig up the roots to locate the small pointed shoots called corms. These can be removed, peeled, and eaten, added to other spring greens for a salad, or cooked in stews or alone as a pot herb. As the plant growth progresses to where the shoots reach a height of two to three feet above the water, peel and eat like the corms, or sautee.

In late spring to early summer, some of my favorite food products come into fruition on the cattail. Soon after these shoots become available, the green female bloom spikes and the male pollen spikes begin to emerge. These spikes can be found in the center of the plant and form a cylindrical projection that can only be detected when you’re close to the plant. Peel back the leaves in the same way you would shuck corn, and both the male portion above and the female below can be seen. The female portion will later develop into the familiar brown “cattail” seed head from which the plant’s name is derived. The male portion will atrophy into a small dried twig that may easily break off the top of the seed head. Both the male and female pollen spikes can be boiled and eaten like corn on the cob, and both are delicious. The male portion provides a bigger meal at this stage. They have a flavor that is corn-like, but distinct from corn. Both may also be eaten raw.

Later, the male pollen head will begin to develop an abundance of yellow pollen with a talcum powder consistency that can easily be shaken off into any container. Several pounds of this can be collected in less than an hour. The traditional use of this pollen is to substitute for some the flour in pancakes to make cattail pancakes. This also works well with cornbread. Other uses of the pollen include thickeners or flour extenders for breads, cakes, etc.

In late summer to early fall, the tender inner portions of the leaf stalk may still be collected, but the availability of this Cossack Asparagus begins to dwindle, due to the toughening up of the plant. During this period and all the way to spring, the most abundant food product, the root starch, may be harvested.

To extract the flour or starch from the cattail root, simply collect the roots, wash, and peel them. Next, break up the roots under water. The flour will begin to separate from the fibers. Continue this process until the fibers are all separated and the sweet flour is removed. Remove the fiber and pour off the excess water.

Allow the remaining flour slurry to dry by placing near a fire or using the sun.

Cattail root flour also contains gluten. Gluten is the constituent in wheat flour that allows flour to rise in yeast breads. The Iroquois Indians macerated and boiled the roots to produce a fine syrup, which they used in a corn meal pudding and to sweeten other dishes. Some Indians burned the mature brown seed heads to extract the small seeds from the fluff, which was used to make gruels and added to soups.

The jelly from between the young leaves (most plentiful in the Springtime) can be used as an itch or pain reliever. It has astringent, coagulant, pain-relieving and antiseptic attributes that can slow or stop bleeding, ease pain, and help clean wounds or scratches.​

If you pull up the cattail roots, split them and mash them a little bit, it will produce a poultice. This poultice acts as an antiseptic and can be used to relieve pain and inflammation in cuts, wounds, burns, stings and bruises.

A cattail’s yellow pollen can be used either externally or internally.

The brown seed down of the cattail can be used to treat diaper rash or provide padding for a splint. You can also use it as kindling to start a fire. Make sure to have other kindling ready to take the flame because the down burns very quickly.

Finally, the ash from burned cattail leaves has an antiseptic and styptic (stops bleeding) quality.

Other survival uses of cattail

They can be woven into baskets, hats, mats, and beds. The dried seed heads attached to their stalks can be dipped into melted animal fat or oil and used as torches that can last up to 6 hours.

Here is a video on how to make cordage from cattail: