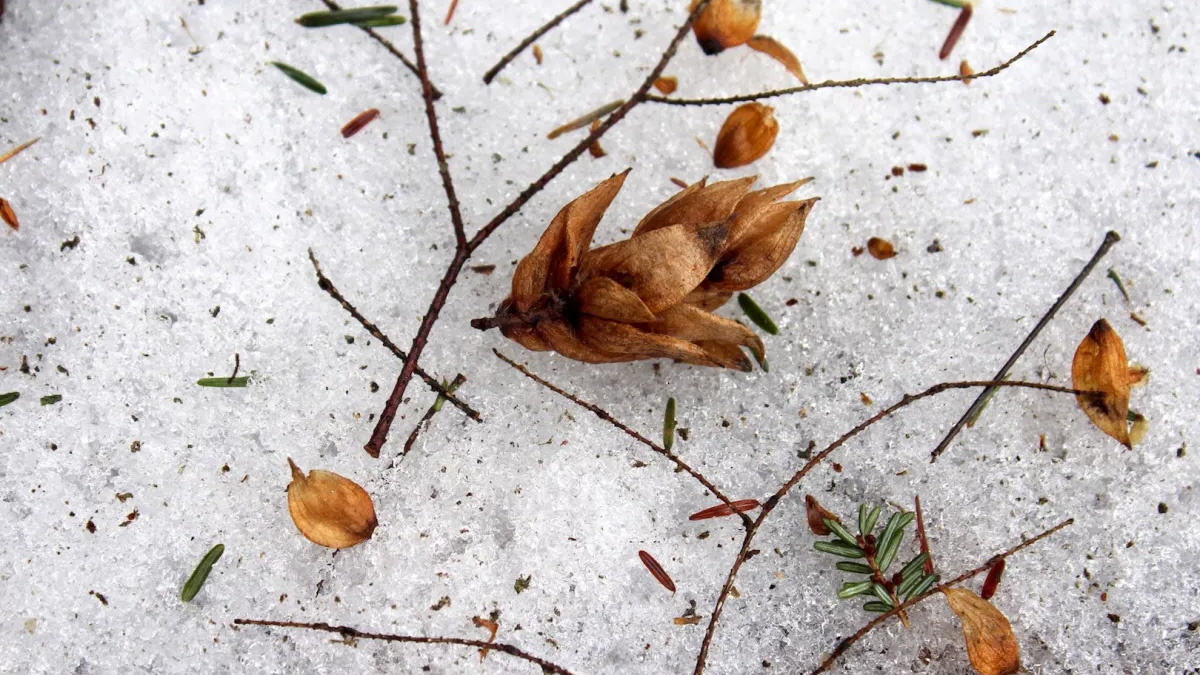 It is winter and snow is on the ground, but you are hungry and aren’t having much luck with hunting. So what can you do to provide yourself with some calories or at least some variety in your diet? Believe it or not, there are still things that you can forage.

Seeds are nutrient-dense and they tend to store well.  Your main problem foraging seeds is competition.  Did the squirrels and field mice beat you to your score, or is there still some to be had?

In a real emergency, finding a squirrel’s nut stash is a great way to get extra calories in the winter.  Native peoples used to wait for squirrels to gather the best beech nuts and then raid the cache, which is a much more efficient way of gathering them than foraging yourself.  Unless you really need it, remember that the squirrel doesn’t have a grocery store, and so long as you do, it’s pretty cold-hearted to steal them.

Though they taste best if they’re removed from the husks quickly, black walnuts are often still abundant well into winter.  They take considerable effort to crack, which means they’re not as popular with both foragers and squirrels.  Start by removing the pulpy outer husk, but be careful, it’s a powerful dye and it’ll stain anything it touches.  After that, the nuts are inside very tough shells and can be cracked with a hammer or large rock and some elbow grease.  The extra time in the husk makes them a bit more bitter than normal, but they’re still worth eating.

In the fall, black walnuts drop from trees wrapped in a spongy green husk.  That husk is used to make an iodine-rich black walnut tincture that can be used as a nutritional supplement (and antiseptic) if you’re away from sea-based iodine sources.  Once the green husk degrades, the nut shells are stained black by the dissolving husk (thus the name black walnuts).  The nuts, still in their shells, will remain good to eat all winter long.  The trick is beating the squirrels to them.

There are dock plants native to most places in the world, and they all produce tall shoots covered in seeds.  The seed stalk is fibrous and remains upright even under heavy wet snow.  With several feet of snow on the ground, there’s still a good chance dock seed heads will be sticking up dotting the landscape.

Dock seeds are much like buckwheat and can be toasted and ground into flour.  The seeds strip easily from the stalk, and you can gather enough to make a quart of flour in just a few minutes.  Here are a few recipes for using dock seed flour.

In most years, oak trees produce so many acorns that the squirrels can’t possibly get them all.  A little digging under an oak tree and you’ll find enough to process into acorn flour.  There are a number of ways to leach the tannins from acorns, but if you’re patient, the cold leach method allows you to do it without expending any extra fuel.

Maple tree seeds are edible, contain protein, and can be used as survival food in winter months, however like many wild edibles the best flavours are enjoyed in spring. As the year progresses they tend to gain a hint of bitterness and by the time winter rolls in, what is left is shriveled and somewhat bitter; but make no mistake, they are still edible.

To eat maple tree seeds you need to remove the wings. Some people will eat the seed pod as a trail snack however, many people like to roast or boil them. Maple tree seeds are similar to acorns; the taste can vary from tree-to-tree so trying some from several trees is an option.

If you find eating them raw doesn’t suit your tastebuds try boiling them for about 15 minutes or roasting them.

As with any wild foraged food, be absolutely certain you have identified the plant correctly before consuming.

Also called winter chanterelles, these tasty mushrooms in the chanterelle family can be found through most of the winter. They have the same false gills as chanterelles, but a hollow stem.

Oyster mushrooms grow on downed logs or standing dead wood, and can often be found year-round. They won’t tolerate a hard freeze but can survive the winter in less frigid areas.

Chaga fungus is low in calories, and is usally taken as a tea. It is believed to boost immunity by reducing long-term inflammation. It grows as a large knobby looking thing, usually on birch trees. Great care is required when harvesting to ensure that it will come back year after year, as it is a very slow grower.

This medicinal mushroom also grows on trees through the winter, making it great to forage in the colder months. Turkey tail mushrooms are most often made into a tea and they are great for the immune system.

If the ground has frozen then you aren’t going to be able to get to the roots without expending more calories than you will gain. Wild parsnip, carrot and burdock can all be dug up – but there is a greater risk that you will mistake them for their poisonous cousins and so we do not recommend it.

If you know where a stand of cattails is, you might be able to dig up the edible roots in the winter. In late winter you also may find the first shoots that are starting to come up, and those are supposed to be really tasty!

Also known as a Sunchoke or Earth Apple is not actually an artichoke at all. is a species of sunflower native to central North America, but they have naturalized across a wide area due to cultivation by native tribes. Its tuber is prized as a root vegetable.

The tubers are used for cooking and baking in the same ways as potatoes: but unlike the potato, they can also be eaten raw. They have a similar consistency, and in their raw form have a similar texture, but a sweeter, nuttier flavor. They do tend to get mushy when boiled, so steaming is better.

Jerusalem artichokes have 650 mg potassium per 1 cup (150g) serving. They are also high in iron, and contain 10-12% of the USRDA of fiber, niacin, thiamine, phosphorus, and copper.